Today in 1842 saw the death of Thomas Arnold, Head of Rugby School.

Though his concern was simply for the cure of souls, he is remembered as inspiring the ethos of the English public school system, by initiating a Prefect System.

This placed responsibility on the senior boys to show a measure of control over their juniors, an idea no doubt picked up from his time as a pupil at Winchester under Dr. Goddard.(1)

However this classic case of divide and rule, led to a system which allowed beating and ‘fagging’, with the compensation that one day, one might inherit these privileges-a system described in  ‘Tom Brown’s School Days’, by Thomas Hughes.

It must have come as a shock to Tom, used to the comfort as a son of a yeoman farmer.(2)

Conditions of boarding, were pretty barbaric and primitive. Boys at Eton washed at the pump; food would have been basic. One day in 1832, Headmaster, John Keate, (1809- 1834), flogged eighty boys, no doubt necessitated by the huge size of forms then.(3)

Latent unrest was ever present, especially where rich boys, often titled, confronted those they saw as inferior, which included the masters.

There were rebellions and ‘barrings-out’, but whilst the prosperous merchant class and aristocrats managed to co-exist reasonably well, wide-spread mis-behaviour and riots were frequent.

A riot at Eton, in 1743, resulted from a Commoner being expelled, whilst a Peer’s son was pardoned. At Rugby in 1797 the boys blew up the door of the Head’s study with gunpowder.

At Winchester in 1808, there was a riot when a Saint’s Day, became a working day; in 1818 a rising was put down by soldiers with bayonets. The last serious rebellion on record, was at Marlborough College, as late as 1851.

It was about this time that organized games became common, which no doubt expended surplus energy. Games had been little regarded, in the early days: Butler at Shrewsbury (1798-1836), saw football as only fit for butcher boys.

At Eton in the latter 18th century, such games as battledore, tops and hoops, were still played, allied with drinking and gambling. Arnold’s Rugby only saw organized games, as an alternative to poaching and fighting the local boys.

Reform into the modern notion of public schools, came with Heads such as Thring at Uppingham, Vaughan at Harrow(4) and Pears at Repton, reinforcing the ideal of muscular Christian duty; producing men fit to run an Empire, via a diet of manly games and Classical languages.

Regulation came with the 1868 Public Schools’ Act, which saw some progress in attempts to widen the curriculum

(1) Goddard attempted to treat, in theory, all boys-commoners and aristocracy-as equals, but inevitably found, some pupils and parents had more influence than others.

(2) Tom en-route to Rugby, in the novel, enjoyed, in an inn, kidneys, muffins, pigeon pie and coffee which was a treat, till his ‘skin was tight as a drum.’

(4) Vaughan was implicated in homosexuality, which was rife in the mid 19thc at the school, and resigned to become Bishop of Rochester. He again resigned, when threatened with exposure, and eventually ended as Bishop of Llandaff!

One would have been imprisoned in those days for his crimes.

Today in 1784 the poet and son of a clergyman, William Cowper (pronounced Cooper) sent a poem to his friend the Rev William Cawthorne Unwin, Rector of Stock in Essex, who was tutor of his two sons.

The poem entitled Tirocinium or Review of Schools, recommended private tuition in preference to education at school, is inscribed by his affectionate friend William Cowper, Olney.(1)

Cowper’s injunction must have reflected the public schools of the 18th century which were hotbeds of gambling, drinking, homosexuality and cruelty, with novelist, Henry Fielding describing them as ‘nurseries of all vice and immorality’.

However the problems were more than vice, as unruly and violent behaviour involved the blowing up of the headmaster’s room with gunpowder, in the Great Rebellion of 1797 at Rugby, requiring the call out of the militia and the reading of the Riot Act, which action was also needed at Eton and Winchester for disorderly behaviour. In 1818 an uprising at Winchester had to be put down by soldiers with bayonets.

At Eton and elsewhere, the boys had to wash at the pump. Discipline was harsh; on one day in 1832 John Keate head from 1809 to 1834 flogged eighty boys, necessitated by the huge size of forms; Keate himself took all the Upper School of 198 boys at a time when there were 570 boys and only nine masters.The last serious rebellion on record was at Marlborough as late as 1851.

Excesses of high spirits, leading to violence could have reflected lack of provision for organised games. Butler at Shrewsbury 1798-1836 said that football was only fit for butchers’ boys. At Eton in the latter 18th century, such games as battledore, tops and hoops were still played, when they weren’t drinking and gambling.

Thomas Arnold of Rugby had no great inclination towards sports, but were permitted as alternatives to poaching and fighting with the local boys. His priorities, as an evangelical, were the cure of souls, development of morality and only then was he concerned with intellectual attainment, an ethos to continue in public schools, for some considerable time.

Most public schools before the Arnold reforms at Rugby, and Thring at Uppingham, thus were pretty barbaric as seen in Thomas Hughes’ ‘Tom Brown’s School Days’, which gives some notion of the conditions of boarding. Beating by Headmaster and Prefects was accepted practice and bullying was widespread along with ‘roastings’ and fagging, which could only be ameliorated if one had a senior boy to stand up for you, as we read, in literature, when Tom Brown had Diggs and David Copperfield had Steerforth. 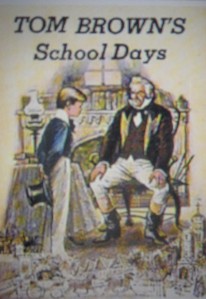 It was a violence and abuse, endured by the pupils, at that time and later, which went largely unnoticed as ‘tales were not told out of school’, especially as attendance was considered well worth the expense by parents, which was out-weighed  by social connections deemed essential in future life, in the growing empire and commercial activity of the 19th century. This was particularly important, as the nobility were increasingly sending their male offspring to these institutions. The old boy network was thus set to come into its own.

(1) Cowper, a devout evangelical, in his religious beliefs, followed those held by John Bunyan,